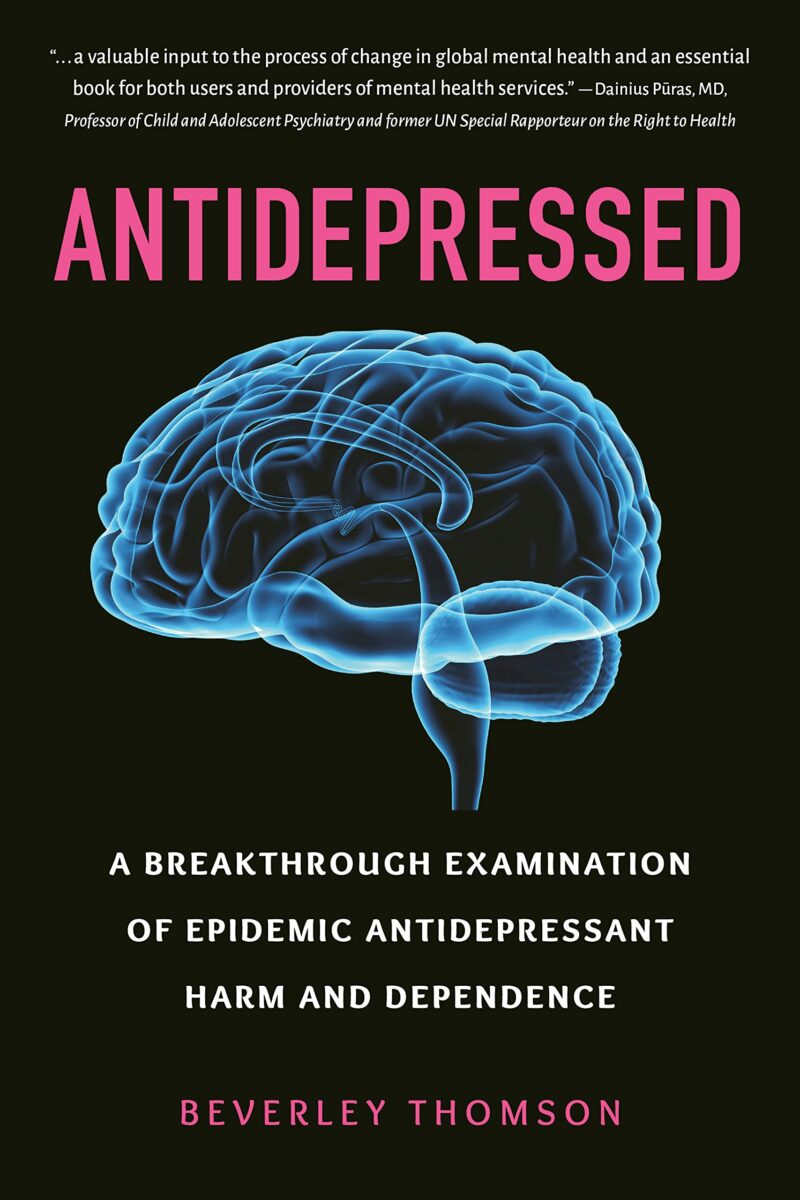 Antidepressed: A Breakthrough Examination of Epidemic Antidepressant Harm and Dependence by Beverley Thomson.  Book review by Stevie Lewis, Board Member of IIPDW

This is based on a book review written for the journal Psychosis: Psychological, Social and Integrative Approaches

The author of Antidepressed, Beverley Thomson, is a writer, researcher and speaker with a focus on psychiatric drugs including antidepressants and benzodiazepines; their history, how the drugs work, adverse effects, dependence and withdrawal. Her aim is to empower the patient to make informed choices about psychiatric medication, and this is the clear objective of this book.  Beverley speaks directly to the patient.

Her book is divided into five parts, with each covering a particular issue around the subject of SSRI and SNRI antidepressants.  Firstly, it describes how we got to where we are with the prescribing of these drugs, by giving a history of the medicalisation of mental health services and the propagation of the myth of the “chemical imbalance”, the unproven supposedly scientific medical rationale which hooked so many of us into taking an antidepressant in the first place.

Secondly, and this is the heart of the book, the author takes the patient by the hand and walks them through the process of deciding to take an antidepressant.  She outlines the latest research and understanding of the risks of taking these drugs, information which generally has not been and still is not shared with patients by their prescribers.  This includes the adverse effect akathisia, antidepressant-induced suicide and the proliferation of the diagnosis of “medically unexplained symptoms” (MUS) given to people in withdrawal.

Antidepressant withdrawal itself is covered by detailing how those of us taking them become physically “dependent”.  Most people taking an antidepressant only discover they have become dependent when they change or stop their dose, as this is the point at which withdrawal symptoms start to appear.  I speak from personal experience, having taken an antidepressant and, feeling perfectly well, deciding to stop and being hit by a deluge of symptoms that were different from anything that had ever happened to me before.  Withdrawal symptoms per se are worrying, disturbing, and for some people, me included, terrifying.  However, what is worse is how blind prescribers have been to withdrawal, seeing relapse or “medically unexplained” or “functional neurological” symptoms, or a new mental health problem in their patients instead of what is simply the painful adjustment of the antidepressant-dependent brain and body to the absence of the drug.

Part three of the book covers safe antidepressant management and withdrawal, giving guidance to the patient on how and where to find the best current advice, including safe hyperbolic tapering and tapering strips.

Part four is entitled “Special Concerns”.  Here the author looks at how particular populations have been targeted for the prescribing of SSRIs, including the armed forces, the elderly, and children and young people.  However, it is the section on generics which particularly caught my eye, as it is the subject which I have not seen highlighted by anyone other than Beverly Thomson.  This is an issue which is relevant, I believe, to all classes of psychiatric drugs.  When a named brand patent expires, a generic version can be produced anywhere in the world.  At the time of prescribing the patient will be told that the generic version is the same as the branded version, but in fact there will be subtle differences.  Generics are supposed to be bio-equivalent to the brand name original, but other ingredients may differ or they may be absorbed and used differently by the body.  This is particularly problematic for people taking antidepressants as, if they have become physically dependent, the generic may cause adverse effects or withdrawal effects.  Again, here I speak from personal experience.  Similar to many patients, I was prescribed the cheaper generic instead of the branded antidepressant that my body and brain had become used to and dependent on.  I suffered severe adverse effects which only resolved with the reinstatement of the original branded version.

Finally, section five of this book is filled with patients’ stories, taken from a petition raised in Scotland to bring to the attention of the Scottish government the difficulties some people have when taking and withdrawing from antidepressants.  Some of the stories are very harrowing. My own anonymised story is amongst them.

The subject of this book is the examination of “antidepressant harm and dependence”, so it is not a place where you are going to find feel-good success stories.  Critics may say that it presents an unbalanced view, focusing solely on the risks of these drugs and ignoring the benefits.  Indeed it does, and the time has finally come for an honest assessment of the impact that taking antidepressants, particularly long-term, can have on the human body.  According to Davies and Read’s 2019 meta-analysis of research of antidepressant use1, over 50% of people taking an antidepressant will experience withdrawal symptoms, and 50% of those will describe their symptoms as severe.  That represents a lot of human pain from a pill marketed by drug companies and described to patients by prescribers as safe, effective and non-addictive with self-limiting discontinuation symptoms of up to two weeks.

Antidepressed tells it like it is, in simple language, broken down in a very readable format that a lay person can understand.  However, what is being described is a number of complex interdependent systemic problems associated with antidepressants and dependence, none of which is easy to solve by itself.  But one thing which will initiate change, is if a patient has a better knowledge of the possible downsides of taking an antidepressant, enabling fully informed consent at the time of first prescribing.  This book will empower the patient to do exactly that.